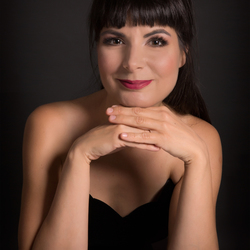 Complex pieces are unique to Mariann Marczi of Hungary. She has chosen to play grand works like Bach’s Goldberg Variations, Haydn’s The Seven Last Words of Our Saviour on the Cross, Ligeti’s Trio for Violin, Horn and Piano or Bartók’s Out of Doors. She likes to be challenged on the podium.

Mariann Marczi is professor at the Piano Department of the Franz Liszt Academy of Music, Budapest. She was born in Hungary on the 6th of February, 1977. She began learning to play the piano at the age of four and in 1991 entered the class of Marianne Ábrahám and Gábor Csalog at the Béla Bartók Conservatory in Budapest. She received her Performance Artist Diploma and Master of Music degree in 2000 at the Liszt Ferenc Academy of Music in Budapest under Professors Sándor Falvai, Péter Nagy, and András Kemenes. She continued her postgraduate studies in Berlin at the Hochschule für Musik “Hanns Eisler”. She also took part in various master classes (György Kurtág, Ferenc Rados, Zoltán Kocsis, Florent Boffard, Pierre-Laurent Aimard, Eliso Wirssaladze and Dmitri Bashkirov). She completed her studies in 2005, studying in the Doctor of Music (DLA) department under Professors Márta Gulyás and Márta Papp at the Liszt Ferenc Academy of Music in Budapest.

She has played in the most important concert halls of Hungary, in almost all European countries and in the United States. She has recorded for the Hungarian National Radio, Hungarian Television, Danube Television, the Austrian National Radio, the Bavarian Radio in Munich, and the hungarian television channel TV5. She regularly plays at a number of festivals ranging from the International Bartók Festival, the Szeged Chamber Music Festival, and the Zemplén Festival to the Prague-Vienna-Budapest Festival, the Centre Acanthes Festival, the pPianissimo Festival, the “Spring in Russia” Festival and the Ziethen Music Festival. She has collaborated with well-known conductors such as Mátyás Antal, Tamás Pál, Zoltán Peskó, László Tihanyi, Massimo Testa, Ferenc Gábor, Konstantia Gourzi, and Valerio Sannicandro. She has worked with contemporary music ensembles such as the Ensemble Echo Berlin, New Aud Ensemble Budapest and the Ensemble Wiener Collage.

Her repertiore contains solo and chamber works from the early baroque to contemporary music. Some of her orchestral performances have been Messiaen: Oiseaux exotiques, Liszt: Piano concerto in E flat major, Mozart: Piano concerto in E flat major K271 and in d minor K466. Her name is associated with the first performance of some of the works in her repertoire. She regularly works together with contemporary composers such as György Kurtág, Zoltán Jeney, Gyula Csapó, Gyula Fekete, Nikolai Badinski, Ruth McGuiré, and Valerio Sannicandro, Péter Tornyai, Máté Balogh.

In 2013 Mariann became an Odradek Records Artist with her first album, “Splinters” featuring 20th Century Hungarian Works for Piano in 2013, which was nominated for the BBC Music Magazine Award. The album received excellent reviews in leading international music magazines: “… an original album without a single superfluous note.” Sinfini Music, Norman Lebrecht (2/12/2013) “… a pianist of fine, sensitive touch … this is a wonderfully intelligent disc, beautifully played.” BBC Music Magazine, Ivan Hewett (03/2014) “The pianist Mariann Marczi from Hungary has to be highly praised … Here we have a purist recording with a clear concept.” Piano News, Burkhard Schäfer (09/2015) Her second recording, “Past Visions” paying homage to Schubert and Schumann was released in February 2019.