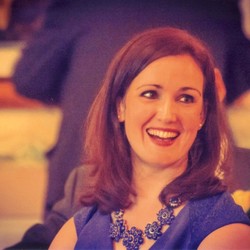 Joanna Wyld was born and educated in London before reading Music at New College Oxford, where she was an Instrumental Scholar. She taught music theory to the choristers of New College Choir, and was listed as one of the Women of Distinction in 25 Years of Women at New College.

Joanna then took a Masters degree (MMus) in composition at King’s College, London and studied flute with Professor Clare Southworth at the Royal Academy of Music.

Earlier in life Joanna attained a mark of 100 per cent in her English Literature A Level, showing an already considerable ability with words.

Joanna is an accomplished flautist, and was Principal Flute of all the major Oxford University orchestras. Joanna was the joint winner of the Oxford University Sinfonia Composition Competition for her orchestral work Jethro Furber’s Change of Heart, based on the novel Omensetter’s Luck by William H. Gass. Joanna’s compositions were also performed by the Choir of New College, Oxford, and in workshops with the BBC Singers and composer/pianist John McCabe, who described her piano Sonatina as “exciting”. She was commissioned by Edward Higginbottom to orchestrate a Bruckner Motet for performance by the combined choirs of New College, Christ Church and Magdalen, Oxford in the Sheldonian Theatre, and has re-orchestrated two Mozart operas for performance by opera company Hand Made Opera.

Joanna Wyld is an experienced editor and proofreader, and between 2001 and 2007 was Editor at Sanctuary Classics. She is currently Editor at Odradek Records.

When writing for children Joanna has shown particular versatility, completing a note in verse for a disc narrated by Harry Enfield, as well as writing a short biography of Enfield, commissioned by his agent. On the strength of this release, Magpie’s Susan Stranks commissioned Joanna to write a poem for the children’s online radio station Fun Radio Live.

Writing in other fields has included working with the charity Stop The Traffik to produce a book of the same name by Steve Chalke, used as a resource by the UN. Joanna also co-wrote with Steve Chalke Apprentice and the Apprentice DVD Participants’ Guide. Apprentice sold out in two weeks, the publishers attributing its unprecedented sales levels to the book’s “easy to read style”. Joanna has also edited materials for the Museum of Transport and the Postal Museum and Archive.

Joanna Wyld is passionate about music education. She is a flute teacher with the Bromley Youth Music Trust, and is part of a trio comprising two flutes and a piano, called Trillium. She has also worked closely with the Cavatina Chamber Music Trust as their Schools Co-ordinator.

In 2014 Joanna won the Oxford University Press spoof Grove Dictionary article competition, and was also awarded both second and third runner-up slots. The OUP judges noted: “… in wit and prose most [of the shortlisted entries] seem to have flowed from the fingertips of the same inspired author”, one judge adding that the winning entry was “the only one that made me laugh out loud.”