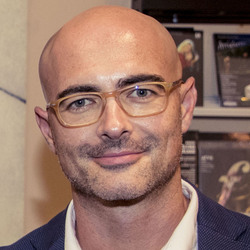 With a background in classical music performance, Enrique graduated in piano in Salamanca and organ in Amsterdam. He soon found that he didn’t like teaching, wasn’t cut out for playing concerts, and that it was almost impossible to earn one’s living decently as an organist by playing masses (and in any case by that time he simply couldn’t contemplate getting up early on a Sunday morning to go to church). But what he discovered was that he not only enjoyed, but did a pretty good job of organising concerts for his fellow students at the conservatoire, and managing the Students’ Union. Then he decided to study for a Master’s degree in Cultural Management, thinking that such a task would open some doors and close some gaps in his education.
What he once considered to be a lack of focus on his professional career, he now regards as the key to his global understanding of classical music, and what makes him a consultant. He’s been fortunate to have worked in this industry from almost all sides: in public institutions (Production and Editorial Manager at the Centro Nacional de Difusión Musical – Auditorio Nacional in Madrid), private foundations (Production Manager at Fundación Caja Madrid and Fundación Caja Duero, and Production Assistant at Fundación Siglo), management agencies (Segura Management), record labels (Editorial Coordinator for Universal Music Spain), festivals (Artistic Coordinator of the Semana de Música Religiosa de Cuenca, Production Director of Florilegio Salmantino and Sweelinck Festival in Amsterdam), competitions (Coordinator of the Sweelinck Organ Competition), orchestras (General Manager of Orquesta Opus23), exhibitions (Orpheon Foundation of Early Music Instruments), music conferences (Director and Founder of ExpoClásica), and music education platforms (Intern at the Association of European Conservatories). After years working for a public institution, and with the threat of being established in a fixed position there for life, he accepted a friend’s offer to manage his independent label, ODRADEK Records, which he happily does up to this date.
Last updated on March 10, 2022