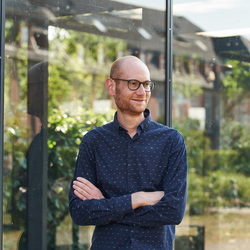 After an early experience in music management at the Teatro del Maggio Musicale Fiorentino, he worked as a managerial assistant for Stage Door, one of the world’s leading artist management agencies, in Bologna from 2010 to 2014. In 2014, he joined music:LX, the Luxembourgish music export office, as a project manager, and developed the classical and contemporary music department of this young organisation. He represented music:LX and its roster of musicians at international networks such as the International Artist Managers’ Association (IAMA), Classical:NEXT and the International Association of Music Information Centres (IAMIC). He collaborated with international record labels, concert organisers and festivals and also created and organised the Luxembourg Classical Meeting, showcasing Luxembourgish artists in their home environment for promoters from abroad in a festival setting. In 2020 he moved to Hamburg with his family.

He loves languages, as they are a way to understand different cultures. In addition to Italian, he speaks English and French, and he is busy struggling to learn German. He can only work if he has a good supply of Moka coffee and chestnuts.